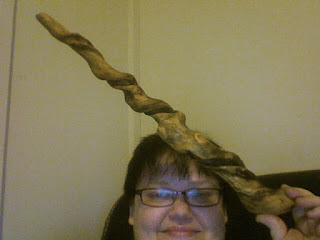 I love making magical tools, amulets, and other items.  I enjoy the magic of it, but I also like the physical crafting.  I'm going to start writing how-to's about the things I make.

Many people will tell you that you have to make your own magical tools.  That's not true; I've purchased tools made by other people, and they were perfectly adequate.  However, I like to do what I call "consecration by design", where I weave the magic into the item as a I craft it.  That being said, it's more important that tools be well-made than it is that you make them yourself.  I certainly don't, for example, forge my own knives.

I've made many kinds of wands over the years.  Copper wands, lathe-turned wood wands, wands made from giant antique cast iron keys, wands made from lead solder wrapped around a stone core, and many others.  My favorite kind is the most simple, and the first kind I made, stick wands.  These are wands that remain visually and energetically close to the tree that grew them.  Rather than being carved out of larger pieces of wood, they remain approximately the same size they were when they grew; you know, sticks.  Because of this, the grain (ie, the vascular structure of the tree) serves to support the movement of energy through the wand.

The first step in making a wand like this is to take a walk in the woods, and ask the spirits to help you find the right stick.  If there is a particular woods that you have a connection with, it's best to go looking there.  Take a small hacksaw with you.  I  keep one like this in my car in case I happen to find a good stick when I'm out.  Lots of people only gather sticks for wands at certain astrologically significant times, but I just do it whenever I happen to be in the woods and find the right stick.  Also, sometimes people who know I like to make wands will give me cool sticks they find.  The stick for the wand above was found by my father, for example.  It's from a quince tree around which morning glories grew.

Sometimes, you'll find the right stick on the ground, but other times it's still attached to the tree.  If it's still on a tree, you should ask the tree's permission to cut it off.  I leave a dollar bill or a piece of candy or something at the foot of the tree in compensation.  (I know those seem like strange presents for a tree, but I don't always intend to find a wand when I go out, so the choices are limited to whatever I happen have on me; it's the thought that counts.)

I, personally, believe that, for magical tools, function and form are closely united.  Different kinds of sticks will produce different kinds of wood.  For most applications, you'll want a straight, strong, slightly tapered stick about as long as your arm from elbow to figertips.  This sort of wand is good for straight-forward operations.  It will produce a strong, tight flow of energy directly from you into the world, without "coloring" the energy too much.  A wand made from a stick that's been "aged" on the forest floor will give a slower, steadier stream of energy, while a green stick can be more
"impulsive" when its new.  Green sticks are also harder to work with in a mundane sense. 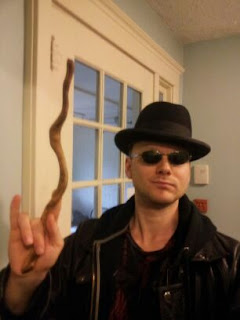 Twisted, gnarled roots, especially from trees that have been hit by lightening or blown over by a wind storm, make excellent blasting rods, full of elemental power.  My old favorite blasting wand, which I have passed on to a friend (in the picture at left), was made from the root of an oak tree from Frick Park that had been toppled by a lightening strike.  I'm making a new one from the root of a poplar tree that blew over in a graveyard.  Honestly, though, I very rarely use blasting rods these days, but they're just so cool looking!

The wand pictured at the top is made from what I call a "twisty stick".  When a vine grows around a tree (usually this will eventually kill the tree), the wood grows around the vine, producing the twists you can see in the picture.  Sticks like this can be hard to find, but once you find a grove with one, there will usually be many.  It's just a matter of finding where the right kind of vine grows.  (The vines themselves grow in amazing twisty loops, but they're not stable/solid enough to make wands from.  They're too brittle when dry.)  These sort of wands are good for more subtle purposes like conjuration.  I imagine the energy channeled through them as spiraling, and so good for "drilling through" things.

I, personally, don't usually give much thought to what sort of tree it is, although I am especially fond of oak trees.  In general hard woods (wood from deciduous/flat leafed trees) is better than soft (coniferous/evergreen) woods, but that's purely because they tend to have prettier grain patterns. There's no magical reason (that I know). If you have a magical connection to pine, for example, go for it.  Contrary-wise, if you've very into the magical associations of plants, than maybe you should be careful to take wood from the "right" kind of tree for whatever application.  Also, some kinds of work call for certain kinds of wands.  (almond and hazel, for example, in the grimoirum)

Once you've found the right stick, take it home. If it came off a living tree, it will be best to let it sit for a week or two to dry out.  Spend some time handling your stick.  Find the most comfortable spot to hold it.  For most purposes, it is better to have the handle end of the wand on the part of the stick that was closer to the roots.  Cut it to the right length, and cut off any smaller branches that stick out.

Wash off any loose dirt, and take it outside.  The next step is messy; do it outside (or elsewhere you don't mind making a mess).  With a box cutter, or other thin-bladed knife, peel off all the bark that will come loose.  Try not the slice the wood at all.  Some kinds of trees, the bark will peel right off, and some it won't.  If it won't peel off, that's ok.  We'll sand it off later.

Go to the hardware store and buy a variety pack of sandpapers.  DON'T cheap out and buy the discount dollar store kind.  It doesn't work.  Starting the the coarsest sandpaper, slowly smooth off all the bark.  Use long, slow, strong strokes, from the handle end to the tip end.  This is important!  Don't sand backwards (unless you have to at some points).  Think about how you'll use the wand as you do, and imagine energy flowing through it.  You'll want to wash it from time to time.

Slowly step through the various sand papers, until you get to a very fine-grained sand called "finish paper".  The stick should be very, very smooth at this point.  I like to run it across my lips to make sure there's no rough spots.  I don't recommend doing all the sanding at once.  I would say that I spend a total of about 10 hours sanding a wand, usually spread over at least a week.  This is an important step; the constant rubbing "teaches" the wand which way the energy flows.

Once you've completely sanded it, and its velvety smooth, wash it lovingly in warm soapy water, and let it completely dry overnight.  For the next step, you'll need paper towels, a small shallow bowl, and at least an ounce of magical oil.  Wear a shirt you don't mind staining, or just forgo a shirt entirely   You want to match the type of oil to the purpose of the wand.  For an "all purpose" wand, I might use van van.  For the conjuring wand above, I use Abramelin and King Solomon oils.  For a blasting rod, I might use High Altar Oil, or just blessed olive oil.  Pour the oil into the dish, and dip your fingers into it.

Slowly, rub the oil into the wand.  Always run from the handle to the point.  Imagine the oil sinking into the wood, impregnating it with its magical essence.  The wood will slowly soak up the oil.  Depending on the type of wood, the weather, and how dry it is, you can get a surprisingly amount of oil to soak in.  Spend at least an hour lovingly rubbing and polishing your wand.  (ha ha)  Try to commune with the spirit of the wand, and learn its name.

I'm not going to recommend it as a general practice, but I have "oiled" certain kinds of wands inside my body.  If you're going to do that, use lots of olive oil, cocoa butter, or some other pure, non-toxic, non-perfumed oil as a lubricant.  Also, make sure you did a really good job sanding.  ;)  If you're going to do this, think first about whether you want to put in the handle end or the point.  If you can't figure out why it matters (energetically), then sticking a magic wand up your twat might be a little "beyond your degree".

After you've finished oiling your wand, let the wand sit for at least an hour (but several days is fine) to let as much oil as possible soak in, and then rub off any excess oil.   I re-oil my wands from time to time.  More oil sinks in every time, leaving the wand even smoother and smelling lovely.

If desired, you can paint, carve or burn magical symbols onto your wand.  I'd do that before I oiled them.  I mostly don't do so, but that's just because I like the way the wands look plain.  I used to make very elaborately painted ones.  I'll see if I can hunt down a photo of one.