Remember a few years ago, when I told you about Asulzaz, the Guardian of Forever?  A spirit I had found "floating around" the edges of my consciousness?  Remember how,  I described my fuzzy vision (I am not very visual) to Brian, and he drew a sketch? 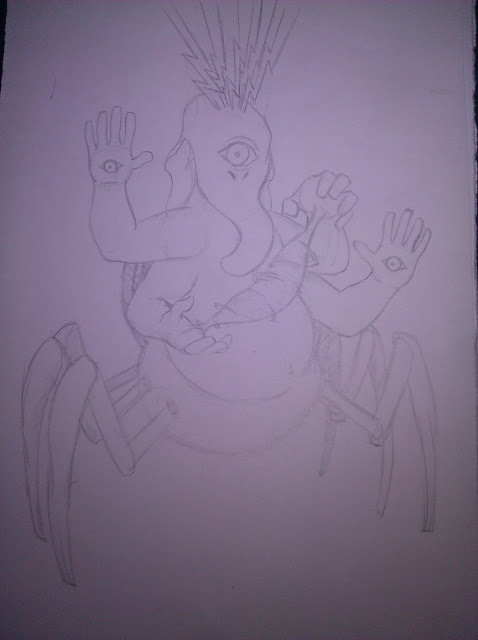 Here is the card called "Creator of Time" from the new Quaeria deck I told you about... 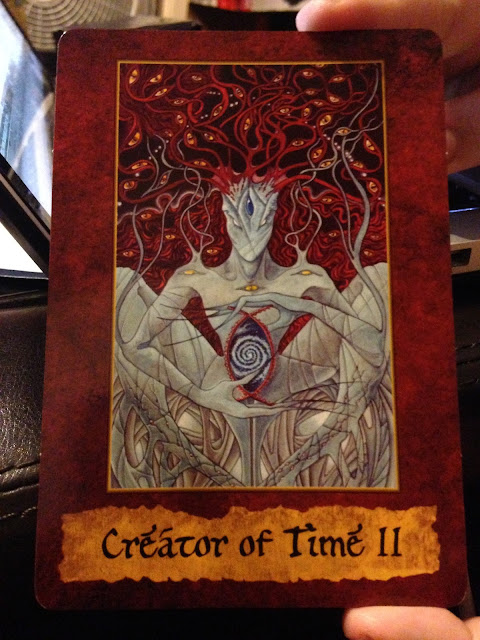 In today's mail, I got a quareia magician deck, the new(ish) oracle deck from Josephine McCarthy, Stuart Littlejohn and Cassandra Beanland.  It's not a tarot deck, it's a set of 81 archetypes, spirits, and forces of the Other Worlds.  The cards are divided into four "types"; The Divine Realm, The Inner Realm, The Physical Realm, and The Realm of Death.  The cards are not evenly distributed; the Inner and Physical Realms are the overwhelming majority of the deck.   Ten of the cards are numbered (see below).  I'm not 100% sure why; they seem to correlate very roughly with the sefirot.  Right now, the categories and numbering don't seem to add anything, but I imagine I'll come to understand them once I work with the cards more.

In general, the cards represent the "people" and places one would see in a visit to the "Other Place" and I am expecting to use them to form sort of "mini journeys" for when I don't have time/trance enough for a full journey.  Even just looking at them, it's clear that each of them is also a gateway into the Other Place; I look forward to using them as portals for scrying.  I imagine they are bad for "fortune telling" about jobs or romance or what have you, but that's not what they're for.  These are MAGICIAN'S cards for communicating with the unseen world.  I'm eager to use them for that.  I'll update this review in a month or two, once I'm more familiar with them.

The art is beautiful, although a sort of uneven. Most of the cards are lush and detailed but (as always) there are some I like a lot more than others.  About a quarter of the cards seem to be done by a different artist (such as the Fellowship card above), whose work is still quite nice, but speaks less to my personal aesthetic than the others.

The colors are a little muddy and the edges are not as crisp as they could be; I assume this is the fault of the printer.  The cards are also not cut cleanly; there are "tags" on the edges that I imaigne will wer off over time.  The cards are not the same proportion as most tarot decks; they are quite wide.  I don't really like that, because they are hard to shuffle (for me, but my hands are VERY small).  They are high gloss and "slippery", they shuffle easily (except for the size issue).  All that being said, none of that really bothers me at all.  My only real issue with the cards is the title placards at the bottom:  The "ye olde fonte" and cheesy ripped parchment marquise is a little too "Lord of the Rings" for me.  But, that's easy enough to overlook, since the deck itself is so amazing.

The included booklet has about 200-500 word summary of each card as well as a description of the "main" layout intended for the deck.  The booklet is clear, concise, and explains really deep things in a very straightforward way, as is typical of Josephine McCarthy's writing.   There's TONS more info, including several spreads, available on the website, which I drooled over for some time before getting the deck.  They come in a regular slip box, which is fine, but I don't expect to wear very well.  I will probably get or make a box or bag for them.  Partly because they only ship from England, the deck is on the pricy side, $42 shipped to the US.   But, I'm quite happy with my purchase, and I look forward to working with them.

The Divine Realm:
The Star Father (I)
The Creator of Time (II)
The Holder of Light (III)
The Archon & The Aion (this is one card)

The Inner World:
The Abyss
The Keeper of the Abyss
The Protector of Souls
The Weaver of Creation
Hidden Knowledge
The Light Bearer (IV)
The Imprisoner (V)
Pure Balance (VI)
The Inner Temple
The Inner Librarian
The Grindstone (VII)
The Unraveller (VIII)
The Inner Companion
Guardians of the Inner Desert
The Utterer
Keeper of Justice
Threshold Guardian (IX)
Chariot
Wheel of Fortune
Fate Giver
Fate Holder
Fate Taker

The Realm of Death
Underworld
The Bridge of Death
Destruction

The Festival of Vinalia Rustica, August 19th (also my late father's birthday). Originally, the festival was dedicated to Venus Obsequens, (Gracious Venus), a VERY old face of the beloved Green Goddess of the Gardens.  As Latin culture gave way to Roman, it was given to Jupiter.  Similarly, our understanding of Venus has also been given over to the Patriarch.

Venus, as we know her today, is much reduced.  Almost everyone sees her as the goddess of love and sex, and while she is, certainly, the Queen of those things, that is not her only, or even her primary, face.  So many of the goddesses, and so many of the gods, were made small, transformed into the playthings of the Father of Heaven.

As I work with the oldest forms of my gods more and more, those first names of the Ancient and Nameless Powers, I am taught about how each gave a great gift to us.  Ereshkigal, The Great White Lady, is also She of the Flint.  Thoth-Hermes, my beloved Orange Lad, invented the alphabet.  And, Venus, She of the Green, taught us to garden.

Venus is the goddess of fecundity; the fertile vigor of the garden and the orchard, the field, the livestock, the mother, the community.  Venus is the overflowing Greenness of Life, the essential "life-ness" of the soul, viriditas.  Says Hildegard: “There is a power that has been since all eternity and that force and potentiality is green!”

The force, the Greening, has been much on my mind lately.  This is the music I most associate with it, but it's behind a paywall (I strongly recommend a subscription).  Here's a runner-up song.

She of the Green, Vriditas Dea, Venus of the Garden and the Glen, Who gives Life, and Love, and Light, and Joy, Who Gives Grace and Goodness, and the Healing Green Light, que in excelso resplendetut statuta columna, you reflect heaven's exceeding radiance like a pillar, you are the Pillar which holds up the Temple, the Tree at the Center of the Grove.  You are the Fig and the Cedar, the Clover and the Rose.  Your skin smells of balsam and your hair of myrtle and roses.  All nourishment pours from your nipples, milk, honey, every fruit of the field, your lips are an orchard of pomegranates.  You are all-together beautiful; there is no flaw in you.  You bring life, health, joy, vigor.  You are the sweet rain that kisses the fields and the green fire that quickens life in the womb. Hear me and bless me, heal and deliver me, comfort and confront me.  Lie with me in the garden and in the grove, Great Green Goddess, All-Loving, All-Healing, All-Giving.

Posted by The Professor at 2:36 AM No comments:

This evening, several local magicians and I worked a global Jupiter ritual (still open for 2 more days!) For a group that hasn't worked together before, it went EXTREMELY well.   Among the prophecies was that we are in "the time between the lightning and the thunder".

As part of the ritual someone asked Jupiter how "to increase the bounty and happiness of the magical community in Pittsburgh". We received a recipe for a ritual, that included collecting several local supplies (water from the three rivers, some special brickdust, "something small and red from the Carnegie Museum") and brewing them into a sort of potion.  Then, we learned five special points around the city to pour the brew, and we were instructed to have a BonFire in the middle (which turns out to be Panther Hollow).  We'll be working Friday, September 16th.  (NOTICE DATE CHANGE) 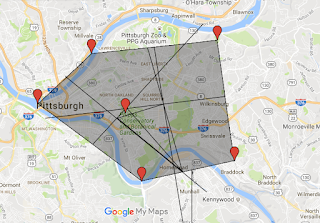 If you'd like to participate with us, please email me at PittsburghWitchHouse@gmail.com or visit https://www.facebook.com/events/624622331031255/