When I suspect students haven't done assigned reading, I make them record themselves reading it aloud and send it to me.  I think they suspect I don't listen to them, but I do (sometimes).  Puck has taken to inserting random "dramatic readings" of his writing into them.  Here's an excerpt from the very end of last night's homework (which ended with a table of trigonometry formulae)  This is a quick transcription, so it's probably not perfect.  Audio file at bottom of post.

"[20 minutes of trigonometry]...cos(x+y)=cosxcosy-sinxsiny...these are...oh, I can see the pattern, and sin(x+y)=sinxcosy+sinycosx ..... I got it, I got it, it becomes obvious how these work after a while.  [another student in background]  "Can you pause it so I can get through..."  [brief silence]  Thank you for making it this far.  Now, as I've finished that, I think I'll continue with a dramatic reading of my novel ... I'm not so great at telling stories, so bear with me I guess.  This story was told to me in the form of a long series of nearly incoherent screams by a homeless man who often sits on the front steps of my apartment building.  His name was, and still is, Chrio, though he insisted, especially in his sudden fits of shouting, on being called [spooky voice] Krioformus, Bearer of the Ram* [end spooky voice].  I've interpreted him as best I could, between the bits of his sudden storytelling I managed to record on my phone, most of which was nearly impossible to understand...

...within the wrappings of the coils of the generator that breathes life into the universe, life coagulates into the solidity of consciousness.  Bread is not the stuff of life; water is life, and bread its complexity and purpose.  Within the gluten of the bread we find stories, pieces of inspiration that allow us to bend the iron bars of reality's cage and escape, for but a moment.  Bread is more than the sum of its ingredients, and so are people.  That makes you unique..."

*Kriophorus is an ancient epithet for Hermes, often translated as "The Good Shepherd", but meaning, more literally, "who Carries the Ram".  It's particularly associated with Hermes in Arcadia (his birthplace) and denotes his role in carrying the "essence" of burnt offerings from Earth to the Heavens. It's the origin of the association between Hermes and the angel Sandalphon, who is often describes as plaiting the prayers of the faithful into wreathes and delivering them to the Almighty.

Have I mentioned that I fucking love this kid?!?!

audio below photo: https://drive.google.com/file/d/0B_upeofrIpFJMGxCdmpxbm9tRTA
Posted by The Professor at 7:00 AM No comments:

The Thunder, Perfect Mind is a gnostic poem from the Nag Hammadi corpus.  Since the first time I read it in my early 20s, I've always been very drawn to it.  For me, it's most closely associated with Shekhina-El.  (the presence above you in the LBRP or B'Shem Hashem). I wrote a little about B'shem Hashem here.  There's also a link to a recording of Neshama Carlbach singing it there.  Apparently, she associates B'shem Hashem with lightning also.

My recent Shakti work has brought it to mind again.  I've made a recording of it.  If you'd like to experience the feeling I get from the poem, and from Shekhinat-El, just listen to the recording while in a trance state.  You might want to do a LBRP or B'Shem Hashem first to call the Presence.

The drumming in the background is by Michael Drake.  It's his "lightening being journey" and can be purchased for $1.  If you like it, please buy it.  I highly recommend his drumming, check out his other stuff too.   He also has instructional cds, which I can't vouch for, but seem like they'd be awesome. (Puck, you should check them out and report back to us.  I'm especially interested in a review of this one.)

The "music" in the background was originally this, but I've pretty heavily altered it.  All the sounds on this site are great.  I recommend it too, and am a donor.

The complete text of the poem, in two different translations, can be found here (George MacRay) and here (Anne McGuire).  The recording hews closely to the MacRay translation, but at a few points, I felt moved to say it a little differently, and I did my best to fill in the gaps where the text was missing or corrupted.  Listen.

I'm very eager for feedback on this.  Please let me know what you think of it if you listen.  It's just over 16 minutes long.  There are no isochronics, but the drumming has a quite similar effect.  I wouldn't listen to it while driving or etc.  Unless you have high quality speakers with subwoofers, I'd recommend headphones.

In response to questions:
1) I didn't alter my voice.  That's just what I sound like when I'm in trance.
2) That's not EVP in the background near minute 6; it's my noisy upstairs neighbors.

Posted by The Professor at 12:00 PM No comments:

If you don't understand what I mean by "4 or 5 dimensional space", you might try this article: http://www.pitt.edu/~jdnorton/teaching/HPS_0410/chapters/four_dimensions/index.html
I assign this article to 13-year-olds, so I'm sure you can manage it.

Recall: By necessity, all of this is, to some extent, metaphoric.  Where I feel like the metaphors are particularly misleading, I tried to use "scare quotes".

To begin with, a brief description of the problem.  For various complicated reasons I don't really understand, our internal energy channels can get "gunked up" in multiple ways.  The first way is that psychological/karmic  "plaque" can get stick to the inside walls, like cholesterol inside a vein.

These blockages can be flushed out (at least it's been working for me) by imagining a warm bubbling fluid passing through the channel melting/dissolving them.  Once they become "unstuck" they can be flushed out through normal bodily processes (exhalation, excretion, menstruation, etc)  I find listening to running water sounds quite helpful in imagining this.


Another kind of blockage is like a bubble.  Popping these feels very much like popping your knuckles or cracking your back.  It is very satisfying, and a warmth spreads after they are popped.  I've been mostly doing this with belly dancing and pranayama, but I expect yoga or tai chi or any other kind of internal energy work would work equally well.

The last kind of blockage (that I've thus discovered; I'm sure there are other kinds) is more complicated.  It's like a knot in a garden hose.  This is where I do the weird 5 dimensional magics.  Because it is hard to explain things in 5d, instead of imagining yourself as a 3d person with a 2d channel inside of you, imagine yourself as 2d drawing of a person with a 1d channel (a line) running up your middle.

The channel runs up your center, and there is a knot in it.  To the (1d) energy in the channel, the knot seems like a wall.  From the 2d perspective (the paper), it's smaller and more complicated, but still intractable.  However, by "zooming out" to a third dimension (looking "down" on the paper), it becomes clear that the knot is twisted through the third dimension. The lines that appear to be "crossing" or "blocking" each other are actually going one "over" the other.  "It's like an overpass, not an intersection."

Imagine you have a coin on a piece of paper, and you draw large box around it.  How do you get the coin out of it's circular cage without crossing the line?  Just pick it up, move it over the circle, and put it back down on the other side.

That being said, some knots cannot be "pulled apart" even in 3d (without passing an end through a loop, but since the channel is actually a loop, that's not an option).  Even those knots, however, can sometimes be easily slipped apart in 4 or 5d.  However, while we humans can see the underlying 4d nature of the problem, and even grasp its 5d nature, actually manipulating things in 5d is not a thing I can do (and I'm really quite good at visualizing 4 and 5 d stuff compared to most people.  I spent many years and most a phD in theoretical math training to do just that.)  This diagram may or may not be clear to people who do not have that training: 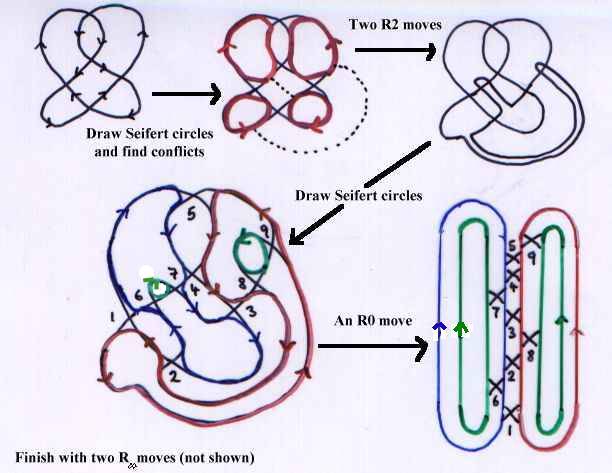 So, instead of having to unknot it in 5d, you can do the crazy Vortex trick, which requires only 4d manipulation. Raise kundalini energy to the chakra just below the knot.   "Tie off" the chakra below the blockage, so energy can not descend from there.  Now, "tesser" by moving along a path perpendicular to the 3d knot.  (ie "pick the coin up" and move it "over" the "circle").  One you're on the other side of the knot, loosen the "cork" at the top of the "klein bottle".

I know that last part wasn't very clear.  I'll try to think about how to explain it better and try again soon.

Continue wiggling until the cork "pops".  The cork will then fall into the chakra below, and can be excreted as before.
Posted by The Professor at 2:53 PM No comments: