If I have a primary plant ally, I think it's Ipomoea.  It's a huge genus, including morning glories, moonflowers, sweet potatoes, and High John the Conqueror root.  They are extremely useful and beloved plants, for both their ornamental beauty and their culinary, medicinal, entheogenic, and magical uses. Many Ipomoea are native to the Americas; they're very common in the north eastern United States, where I live.  Traditionally, they're associated with the planet Saturn, and with binding and trapping magics (like dream catchers or spirit traps).

Morning glories (Ipomoea violacea) have huge, round, funnel-shaped flowers and deep green heart-shaped leaves. They grow beautiful intricately tangled, amazingly strong vines.  Their seeds contain significant quantities of an LSD-like hallucinogen famous for producing visions of faeries. I have never tried it, but I'd like to. The variety pictured above is called "Heavenly Blue".  I don't know the name of the dark purple variety to the right, but it's beautiful!

Moonflowers (Ipomoea alba), pictured below, look very similar to morning glories, but with giant white (or sometimes pink) flowers that open at dusk.  The flowers unfurl so fast, you can watch it happen.  Their smell is said to promote visions and prophetic dreams.

Sweet potato (Ipomoea batatus) is the only ipomoea that's generally used as a food.  Everyone knows what sweet potato roots look like, but many people don't know how beautiful the plant is, with green, maroon, or purple deeply lobed leaves and white and purple flowers. 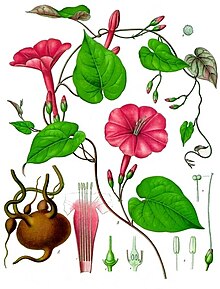 High John the Conqueror, Ipomoea jalapa, is one of the most magical of plants.
The plant is named after an African Americn folk hero.  John the Conqueror was an African prince sold into slavery in the Americas.  Even though he was enslaved, his spirit was never broken, and he is a trickster-hero closely associated with Br'er Rabbit.  (You can listen to a song about him below.  I don't like the video, just the song.)  The roots of High John are used in both whole and in pieces.  The whole, dry roots resemble a black man's balls, making them a very potent talisman for sex spells. Bits and pieces of the root are used to make decoctions and oils, which are typically used for luck or money drawing.

To me, the most important feature of ipomoea is its growth habit.  Morning glories grow extremely fast, producing vines that  twine and trail in spiral helices of power, winding their way up chain link fences and telephone guy lines.  They do this by violently swinging about their bud tips until they make contact with something they can wrap around.  The video above is about one week's worth of growth. 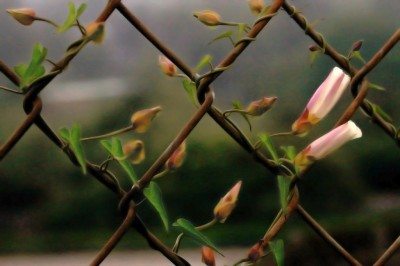 Where I live, in the US midAtlantic region, morning glory vines grow ubiquitously, climbing up trees and fences alike.  Even in the most blighted urban neighborhoods, morning glory can be found everywhere winding it's way down alleys and over fences.  To me, morning glory is a sign of the Hedge, the path between the quotidian world and the Other Place.  By following a trail of morning glories, one is brought deeper and deeper into the Hedge.