Hello, all!  I have a new recurring column at Witches & Pagans Magazine!  You can read the first post below, but from now on, you'll have to visit the magazine to see them.

In the next post, I’ll get to the meat of this blog, introducing you to a variety of lesser-known spirits from around the world and telling you the stories and teachings they tell to me. But I thought I’d start off by talking a little about mythopoesis as an art and a magical practice. The English word mythopoesis comes from the Greek μυθοποιία, and literally means “myth-making.” The second part of the word, “poeia,” is the root of our word “poet.” Historically, the word was an obscure technical term, describing, as Victorian historians would tell it, that period of time when humans made myths “instead of science” to explain the world around them. However, in 1931, J. R. R. Tolkien (author of The Lord of the Rings) published a poem titled Mythopoeia, which was a direct response to his frenemy and Oxford colleague C.S. Lewis’s skepticism about the value of myth. Lewis (at the time, although his views softened with the wisdom of age) believed that myths are "lies and therefore worthless, even though 'breathed through silver.”' Tolkien's poem replies...

“...
a star's a star, some matter in a ball
compelled to courses mathematical
amid the regimented, cold, Inane,
where destined atoms are each moment slain
...
[but] He sees no stars who does not see them first
of living silver made that sudden burst
to flame like flowers beneath the ancient song,
whose very echo after-music long
has since pursued. There is no firmament,
only a void, unless a jewelled tent
myth-woven and elf-patterned; and no earth,
unless the mother's womb whence all have birth.
...
[therefore] I will not treat your dusty path and flat,
denoting this and that by this and that,
your world immutable wherein no part
the little maker has with maker's art.
I bow not yet before the Iron Crown,
nor cast my own small golden sceptre down.”

Like Tolkien, I believe that Creation is an ongoing affair, that moment by moment, word by word, we each breathe ideas into being. Tolkien writes “The incarnate mind, the tongue, and the tale are in our world coeval....in such 'fantasy,' as it is called, new form is made; Faerie begins; Man becomes a sub-creator." Tolkien, however, was still a male, nominally Christian, British aristocrat writing in the 1930s, and his view of the world, like our own, was heavily shaped by his lived experience of it. I write as an American feminist, Jew, witch, and all-around freak, and I go even further than he did: I say that the mythopoet, like the bard or the ovate, speaks for those who have tongues only of flame, and writes for those whose hands are the bare winter branches. For me, bardcraft and mythopoeia are an essential part of my relationship to the gods, the Land, the ancestors, and the World (both the Earth and the Other Places). It is my great hope that the stories and history I share with you here will help you root your practice as well.
Posted by The Professor at 11:52 AM No comments:

Thesmophoria: The Festival of Persephone & Demeter


Thesmophoria, which means "of the Law Giver" (an epithet of Demeter's) is the central festival of Demeter & Persephone.  It was usually celebrated in the fall, when the seeds of next year's crop were sown, although practices varied.  It was among the most wide-spread of festivals, celebrated through the Greek world, dating to at least the 11th century BCE.  Classically, Thesmophoria was a women's' only rite; men were forbidden not only to participate in, but also to just know about, the ceremonies.
Like so much that once belonged to women, the details have largely been lost.  Only two ancient sources remain, and both are deeply problematic.  The first is a commentator called Lucian, famed for his satires and mocking portrayals of religion. The other is the playwright Aristophanes, whose play Thesmophoriazousai (which means literally "Women of the Thesmophoria" but it often called, in English "The Poet and the Women") is a satirical comedy about poets crashing the ritual. So...not a lot to go on. Here is what we do know:

Among the central rites of the Thesmophoria, celebrated almost everywhere, was a sacrifice of pigs, often in very large quantities.  In some places, these pigs were burned whole over huge sacrificial "barbeque" pits called eschara.  However, in othe places, the pigs were instead thrown down pits, and later retrieved.  (How long they were down there, and what was done with them after they were retrieved is unknown.  I believe they were left to rot, and then mixed with the grain seed as fertilizer.) Pigs were sacred to Demeter, the Great Sow, and to Persephone. When Hades opened the earth and "kidnapped" Persephone, a herdsman named Eubouleus and his pigs were swallowed up as well. 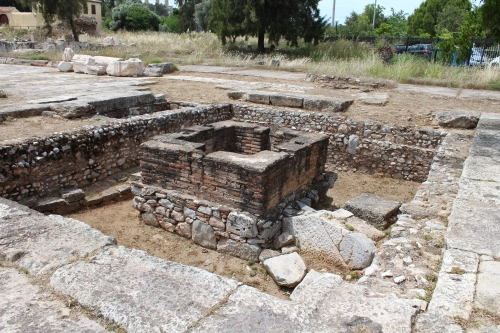 In Athens, the festival lasted from three days, and took place in late October.  The first day was called the anodos (going up).  The next was called nesteia (fasting).  The final is called kalligenia (beautiful birth).  We don't know much about what happened on those three days.

The "anodos" may refer to several things.  Perhaps it is an allusion to Persephone's ascent from Hades, however that is in the spring; at the time of the Thesmophoria, she is descending.  Some scholars believe it simply meant "putting up" the huts in which the women would stay for the three days.  I believe it to refer to a procession up the hill to the ritual site, and the uprising of spirit from the land that empowered the experience of the other days.

On the day of fasting (nesteia), the women fasted and sat on mats.  Fasting while sitting on the ground seems to me to be a mourning posture;  perhaps the women mourn with Demeter her lost daughter.  However, we are told that the mats are woven from chasteberry (Vitex agnus-castus).  This plant was believed in ancient times to be an anti-aphrodisiac, and in men that is likely true; Pliny tells us the women rubbed their genitals with the plant to "to cool the heat of lust", which sure sounds like a thing a man would say about a secret women's festival.  I am skeptical.  Modern studies indicate that chasteberry is an effective medicine for PMS and breast pain.  It is also an insect repellant.  Those both seem like more plausible reasons to me.  In any case, while on the mats, the women engaged in "aischroloia" (dirty talk).  Whether this meant a confession of sins or just ribald or mocking jokes I do not know.  Maybe they narrated sexy stories for each other?  Perhaps it was more like a Norse flyting (boasting contest) or a freestyle rap battle?  I choose to believe it included all those elements.

On the third day, there was a feast (of roast piglets, I assume) which included cookies shaped like snakes and male genitalia.  I believe koulouraikia, a kind of Greek butter cookie, are a remnant of that practice.  Here's my families' recipe for them.  Because of the name of the day, I assume that the ritual component was to ensure fertility and the birth of healthy children, as well as the more metaphoric birth of the grain being planted.  I expect giving birth on this day was extremely auspicious for both mother and child.  However, the name Kalligenia was also the name of the nymph who midwifed Persephone's birth.  Some think it to be a very old name for Gaia.

Posted by The Professor at 1:50 PM No comments: