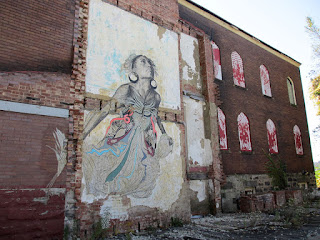 My borough, North Braddock, is among the most distressed in the country. Until recently, the wikipedia article on "urban decay" mentioned us by name. We are considering disincorporation, so that our police, abandoned property demolition, and other services would be provided by the County instead. The County Executive is on board with the plan. The Borough Manager is on board. The corrupt Borough Council refuses to even vote on it. More details about the situation here: https://www.post-gazette.com/local/region/2018/09/22/North-Braddock-disincorporation-allegheny-county-legislation-dissolve-services/stories/201809220003 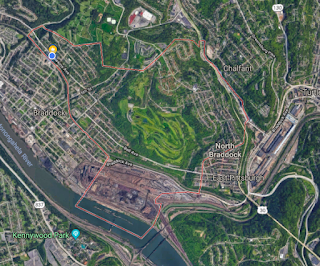 Spirits of the Land, we are calling to you! 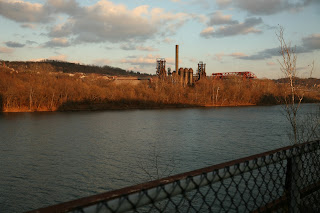 Grandmother Monongahela, Ancient River Dragon, we are Calling to you! 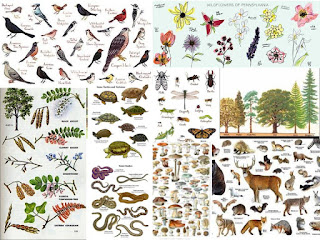 Spirits of the Plants, Animals, and Funguses of the Eastern Woodlands, Kindly and Fair Folk, all Good Neighbors, we are calling to you! 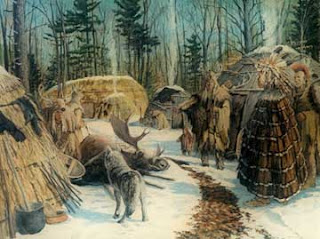 Spirits of the Paleo-Indians and Native Peoples who first inhabited this land, we are calling to you! 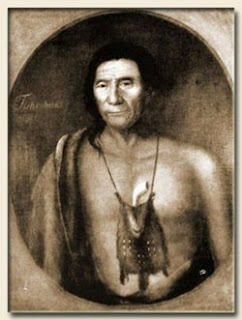 King Teedyuscung of the Delaware, we are calling to you! 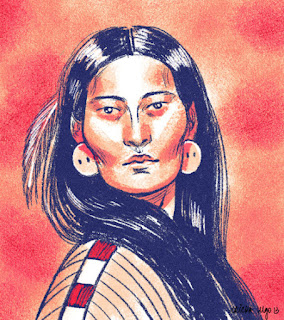 Queen Aliquippa of the Seneca, we are calling to you! 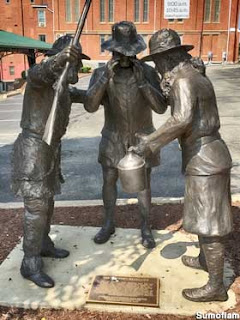 Heroes and Martyrs the Whiskey Rebellion, we are calling to you. 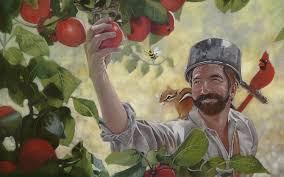 Johnny Chapman, Beloved Brother Appleseed, we are calling to you! 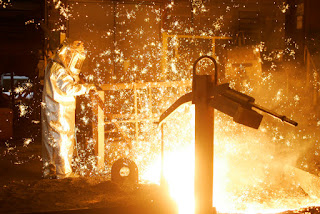 Salamanders and Djinn of Coal Mine and Steel Mill, we are calling to you! 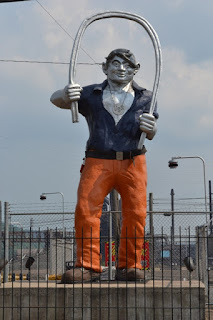 Joe Magarac, Man of Steel, protector of the people, we are calling to you! 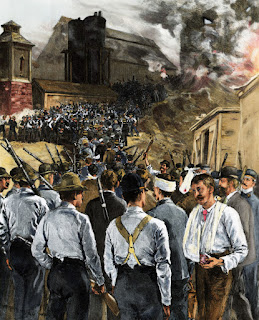 Heroes and Martyrs of the Homestead Strike, we are calling to you! 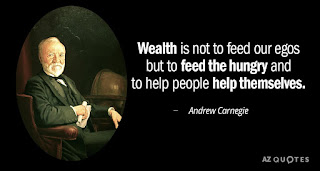 Andrew Carnegie, your blood-debt is due! We are calling to you! 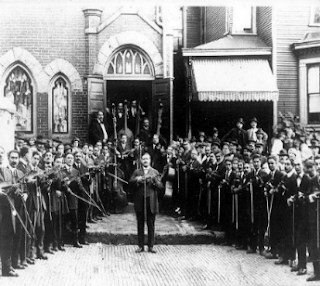 Roma Bards of the Hand Yard, we are Calling to you! 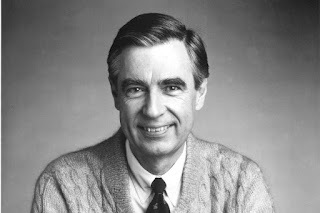 Mr. Fred Rogers, beloved Neighbor, we are calling to you!
Please won't you be our neighbor? 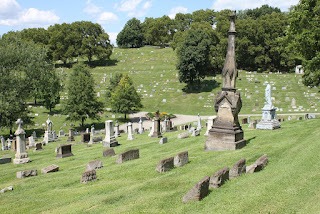 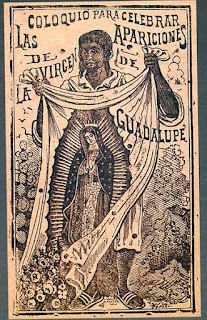 Long Live the Virgin of Guadalupe, and Death to Bad Government!
Posted by The Professor at 1:34 PM No comments:

WITH LIBERTY AND JUSTICE FOR ALL

As many of you know, I've been doing a lot of political magic lately, including last weekend on the Capitol Mall with an initiatory working group dedicated to Athena as the goddess of Right Governance.  One of the things we are focusing on is dissipating the Enemy's illusion magic.  One of the things they've been doing is attempting to capture and pervert our national symbols, including the flag.

Now, if you're anything like me, your immediate reaction to the flag is one of embarrassment.  That's understand.  She has flown over a lot of terrible things.  BUT, she has flown over a lot of Good as well.  Take a moment and examine your feelings about the flag.  For some, you will conclude that the flag is an irredeemable symbol of slavery, genocide, war, and terror, and I hold space for those of you who feel that way.  However, when you examine your feelings, you may (I did) find that you do not, in your heart, feel that way, but have been glamoured by the Enemy.  If you wish to help me, and many others, reclaim the flag as a symbol of Freedom, please affirm (ideall out loud, but silently is ok) the following incantation every time you see a flag:


LIBERTY AND JUSTICE FOR ALL

The Symbolism of Our Flag

Many of us older folks learned about the flag in school, but the Enemy works hard to prevent the teaching of civics, and so many of you might not know much about The Stars and Stripes.  Here is a brief history of her symbolism.

There have been 27 American flags.  The current one was adopted in 1960, when Alaska and Hawaii joined our union.  The current flag is the longest serving.  Modern American flags have 13 stripes (7 red and 6 white) which represent the original 13 colonies who banded together to overthrow our colonial oppressors, and became the first states of the Union.  In the upper left corner, there is a field of dark blue, with 50 white 5-pointed stars, which stand the 50 States and Commenwealths banded together in Union. The current design was created by 17-year-old Robert G. Heft in 1958 for a school project.  He recieved a B- on his flag. When Puerto Rico or the District of Columbia, who have both repeatedly voted for statehood, join our flag will gain more stars.

In 1777, the new House of Representatives put out a small booklet about our flag.  In it, they said: "The star is a symbol of the heavens and the divine goal to which man has aspired from time immemorial; the stripe is symbolic of the rays of light emanating from the sun."  However, this booklet does not speak about the symbolism of the colors, but it does when talking about the national seal.  "White signifies purity and innocence, Red, hardiness & valour, and Blue...signifies vigilance, perseverance & justice."  The exact colors of the flag, in hex, are red: #B22234 and blue: #3C3B6E.  (I cannot set colors by hex in blogger, so those are not exact displays)

Our flag is widely considered to be one of the most beautiful in the world. In China, where it was first seen in 1784, it  caused much excitement: "When the thirteen stripes and stars first appeared at Canton, much curiosity was excited among the people. News was circulated that a strange ship had arrived from the further end of the world, bearing a flag "as beautiful as a flower". Every body went to see the kwa kee chuen [花旗船; Fākeìsyùhn], or "flower flagship"." (Kwoh, Choong (June 15, 1843). "Curiosa Sinica". Boston Courier.)

Posted by The Professor at 2:53 PM No comments: 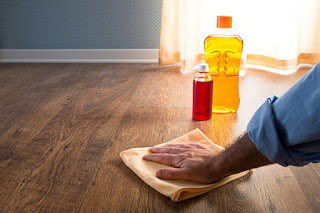 
Begin by boiling the water, salt, vervain, and lemongrass together.  Let it boil for about 10 minutes, and then cool. Strain out the herbs, and then mix in the vinegar.  Slowly drop in the pine needles and broom straws, and then stir 13 times while praying for blessings on your home.  Psalm 127 is a nice choice, as is the Orphic hymn to Hestia, but it is always best to speak your own words to your own gods.  Thank the pine tree and the vervain for their help. Thank the salt and the water for their help. Thank the broom for it’s help.  Fill the bottles with the funnel, and store for future use. The mix can be used as is or added to other cleaners. Remember to label the bottles.
Posted by The Professor at 5:10 PM No comments:

Clytaemnestra: A Hero for Our Age 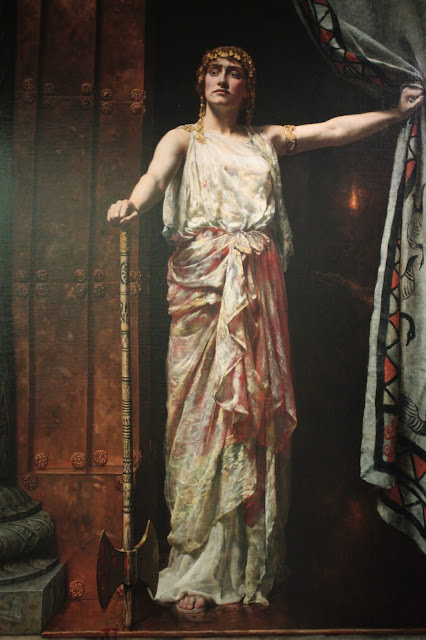 In heiros gamos, Leda was wed to Zeus, while he possessed the body of her priest/consort Tyndareus.  Leda gave birth to four children from that rite.  Two were fathered by Zeus; Helen and Pollux are immortal.  Two were fathered by Tyndareus; Clytaemnestra and Castor were mortals, who live on among the Mighty Dead.  Everyone knows Helen's story, but you cannot really understand it without knowing also her sister's tale.

Stories differ as to the identity of Clytaemnestra's first husband, but most agree that, at some point, Agamemnon, the king of Mycenae, killed her true husband and their infant child and took Clytaemnestra by force as spoils of war, as his brother Menelaus took her sister Helen.
He got a daughter on her, whom she named Iphigenia.  While Iphigenia was still young, Helen escaped her "husband".  Since his claim to kingship was by virtue of his ownership of Helen, Menelaus gathered all the forces of Greece behind him to take her back by force.  But the winds would not blow.  The goddesses protected Helen.  Finally, to raise the winds, Agememnon slew his own daughter, Iphigenia, as sacrifice.  Some say, and I beleive, that Iphigenia was not killed, but rather transfigured, transported across the seas by She of the Wild Places.  In any case, the blood magic was potent, and Agememnon & Menelaus set forth to wage war in Troy.

Now, the story of that war you know, and I will not tell it again here.  While her captor was away at war, Clytaemnestra, the scent of her daughters hot blood still fresh in her nightmares, began to plot to assassination of Agememnon, with the help of her chosen lover Aegisthus.  When Agememnon returned, with the Trojan prophet-princess Cassandra as his captive rape-slave, Clytaemnestra knew the time for justice had come.  Gathering all her power about her, she plyed him with wine and a blow job, and drew for him a hot bubble bath.  And then, she waited.  As expected, he soon feel asleep.  She threw a net over him, entangling him in the bath, and then murdered him with her holy axe.

Posted by The Professor at 2:38 PM No comments: