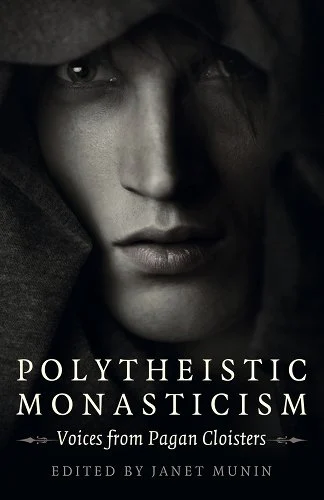 As you surely know, polytheist monasticism is a cause close to my heart.  I consider myself both a polytheist and novitiate nun.  I was excited and delighted to hear of the publication of this book.  It contains eight essays by nine contemporary pagan monastics, and one interview with a pagan monastic, along with some introductory context by the editor, Janet Munin.  The individual essays, for the most part, discuss the writer’s personal experience, and how and why they understand it to be pagan monasticism.  These were all interesting (some more so that others, of course), but personally, I found that many of them lacked details about the author’s specific practices and monastic structures which I could use to help build my own monasticism, and instead seemed more like beautiful and heart-felt journal entries.  Personally, I do not care for that sort of deeply intimate writing, but I know many people like it.  If you do, you’ll find plenty here to make your heart sing!

The second essay, by Kimberly Kerner, “Called by the Spirits, but not to the Priesthood” was one exception; she provided many very specific and useful examples woven into a compelling narrative about how she understands the similarities and distinctions between priesthood and monasticism. Her essay is well-organized, discussion of Devotion, Discipline, Contemplation, and “The Still Center”. While her practice and mine are very different, I found this essay quite inspiring, and especially appreciated the way the topic headings gave me an outline to apply those ideas to my own practice.

Chapter seven, by Rebecca Corvo was also a favorite.  It focused very tightly on one practice, “custody of the eyes.”  In the essay, Corvo discusses beginning the practice focusing entirely on “seeing the hidden and the ignored” especially in Nature, but moved onto averting their eyes from the violent, the impious, and the miasmic.  While they and I do not agree on all details, this was the only essay that moved me to make immediate and very practical changes to my daily life, and for that I am very grateful.

However, while I enjoyed and found value in many  of essays, and think them well worth reading for any aspiring polytheist monastic, it was the fourth essay, by Syren Nagakyrie, that most spoke to me.  Titled “Modern Polytheistic Monasticism: A Revolutionary Vision” it was the only essay in which I really recognized myself and my values (a testament to the variety of viewpoints in the book!).  It focuses on monasticism as an inherently counter-cultural practice, and outlines four basic monastic values : “Resistance to the exploitation of time and labor”, “Resistance to the disenchantment of daily life”, “Resistance to oppression and the devaluation of all beings”, and “Resistance to resource extraction from the earth”.  Found it both challenging and inspirational; just what I want from religious theory!  In my opinion, this essay alone is worth the cost of the book ($12 paperback or $6 ebook).

Posted by The Professor at 3:34 PM No comments:

How to Write a Ten Page Essay in Five Hours

How to Write Ten Page Essay in Five Hours

Posted by The Professor at 11:18 PM No comments:

An excerpt from my recent book Orphic Hymns Grimoire, which you can buy in ebook, paperback, or hardback. 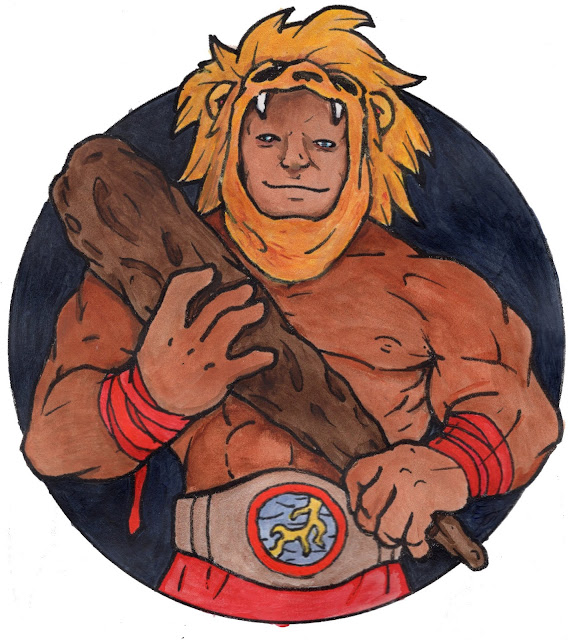 Strong-armed Herakles, mega-mighty brave Titan,
Competitive, adamantine, strong-minded, enlightened,
Shape-changing Time Father, eternal and kind,
Much entreated with prayers from all of mankind:
All know your story, yet your essence is ineffable;
Your wild spirit untamed and forever unquenchable.
All-dynastic ruler who reigns from the heart,
Archer and augur who never misses the mark,
All-devouring pangenitor, adored protector and lover,
Highest and strongest, bravest child and brother,
For the good of all people, you tame savage yearning[1],
Firstborn spear thrower, your heart’s ever burning,
With passion and energy, O daemon great-named,
You wear a crown of night’s blackness tipped in starflame[2],
You bested twelve trials, from the east to the west,
Much-tested hero, ever holy and blest.
Immortal and immovable, immaculate and immense,
Both blessing and healing are yours to dispense.
Come shaking your club to exorcise evil,
Banish even foul death with your weapons primeval.

Herakles is the archetypal superhero of ancient Greece.  Like all heroes, he began life as a mortal.  He was, in life, called Alcides or Alcaeus (Ἀλκαῖος), from the root Ἁλκή, which means “strength of body” or “physical force”.  In life, he accomplished great deeds, including his famous twelve labors.  He then ascended to the ranks of the Mighty Dead or “heroes” (ἥρως) after his death, acquiring the name Ἑρακλης or Ἡρακλῆς.  Many people interpret that name as “Hera’s glory”; it may be more simply “the hero’s glory”.   What is unquestionable, however, is that Herakles’s story is wrapped up in Hera’s, and that his glory is wrested from her.

As the paragon of heroes, Herakles ascended even further, and took his place among the gods.  In this way, he dwells in both the Underworld, among the Ancestors, and in the Upperworld, among the gods. While this appears to be problematic to many commentators, it is very much in keeping with modern folk practices surrounding the Mighty Dead all around the world.  Even in antiquity, some consternation surrounded him being in both places.  Odysseus, recounting a νέκυια (necromantic ritual), says “And next I caught a glimpse of powerful Heracles—His ghost I mean: the man himself delights in the grand feasts of the deathless gods on high…[3]”

No tomb-shrine has been found that can be identified as belonging to Herakles.  I believe this is intentional, and underscores that Herakles, unlike other, more localized cults, is a hero for all of Greece, and all of her cultural inheritors (like us!).  Similarly, it is hard to know when the veneration of Herakles began.  It is attested to as early as the 6th century BCE but was already widespread at that point.

In addition to being physically strong and brave, at his best Herakles is generous, clever, and playful.  However, he is frequently beset by a sort of madness that makes him violent and rapacious.  In many ways, Herakles is the mythic archetype of the classical Greek kingly patriarch.  This is highlighted by his “war” with Hera, and with every other woman in his life.  When Herakles is an infant, Hera is tricked into nursing him, but he bites her on the nipple.  The milk that sprays from her nipple creates the Milky Way[4].  Later, in a bout of madness which Homer attributes to Hera, he murders his children from his first marriage[5].  As penance, he engages in his famous twelve labors.  After that, you would think Herakles would have learned the error of his ways, but it was not so.

While questing with the Argonauts, Herakles meets the princess Iole, who has pledged to marry any man who could best her in archery.  When Herakles competes, even though he wins, Iole and her father refuse marriage to him.  “After all,” they say reasonably, “he murdered his previous family!”

Enraged, Herakles murders the king and his sons, all except Iphitus, who has become Herakles’s lover (the consensuality of this relationship varies, depending who is telling the tale).  After murdering her family, he abducts Iole and takes her home as his sex-slave, against both her will and that of his then-current[6] wife, Deianira.  Iphitus accompanies them.  Time passes, and once again Herakles “goes mad” and murders his lover Iphitus. Seeking absolution, Herakles then spends three years as the slave of Omphale, queen of Lydia, the wielder of the famed axe of power.

In later myth, Hebe is understood as a goddess of youth.  However, in the Peloponnese where she originates, she was worshipped as a goddess of forgiveness and absolution.  For example, freed prisoners, who had atoned for their crimes, hung their broken chains on her sacred trees.  I choose to understand this to mean that heavenly Herakles has finally overcome his madness, which we might today call “toxicity”, and has been truly absolved.  Thus, celestial Herakles is free from the stain of rape and murder, for which chthonic Herakles still atones in Hades.  In penance, Herakles is a strong protector of women and children, and can be called upon in any work that smashes Patriarchy.

A Spell to Defend Women, Children, or
Others Vulnerable to Patriarchal Violence

This is a serious spell for a serious situation; it calls strong forces, has a high cost, and has life-altering results.  DO NOT cast this spell to defend from “abuse”.  This spell is for actually defending from actual abuse.  While it is not explicitly written to harm the abuser, that is likely to be a side effect in proportion to the abuse.  I recommend against casting it on behalf of others unless you are an experienced magician.  Expect significant magical back-lash if you go back to your abuser after casting this spell.  Work with care.

Begin by calming your mental chatter and suspending your disbelief.

Read the Orphic hymn to Herakles, preferably out loud, and then address Herakles directly.  Speak from your heart in your own words, saying something like:

“Herakles, you were an abuser, but you labor to make that right.  As a condition of your labors, I call you to defend me!”

Repeat “I call you to defend me!” over and over until either your voice or your ability to suspend disbelief fails.

Burn the piece of paper over the toilet, and flush away the ashes.

As soon as possible, and before you go to sleep, wash yourself carefully from head to toe.  Finish by pouring salt water over your head.


[1] As we discussed in the introduction, the hymn more literally says “for the good of civilized men, you put down the savages” but fuck that noise.
[2] This is an allusion to the zodiac, which is mythologically connected to the story of Herakles’s labors.
[3] Odyssey, 11:690-693.  Translated by Robert Fagles
[4] Herakles enjoys many stellar myths, including those of his twelve labors, traditionally associated with the zodiac.
[5] His wife at the time is Megara, whom you know from the Disney movie.
[6] The order of his marriages is sometimes different in different stories.

BUY THE BOOK HERE.
Posted by The Professor at 1:56 PM No comments: