Most of you know that I'll be moving to Stamford, CT (one of the most expensive real estate markets in the country) August 1st.  You might also know that real estate magic is a specialty of mine. I'm about to go sign a lease (literally, at noon today) for a super swanky new apartment (at Park Square West) for WAY less than market rate, so I thought I'd tell you all about how I do that.  And to do that, I have to introduce you to Sabnok.  His description from the Goetia is below. (the Mathers translation because that's what was easy to copy/paste online.  I don't really recommend it.)  I find Sabnok easy to work with, and very effective for this sort of thing.  I've conjured him to acquire a new home several times (I move a lot), as have several friends, and we've all gotten good results.  I've never really worked with him for anything else, but he's also known for afflicting your enemies with festering wounds.  That's not really a thing I'm often in the market for.

The working below doesn't have a lot of "safe guards" built in to it, but I don't think they're necessary.  If you don't have much experience with Goetia, or you're scared to work with a demon (They're all ookey spookey!) you could cast a circle/triangle of salt around the candle (more details follow).  If you don't know how to cast a protective circle, you maybe shouldn't be working with demons.

For this spell, you'll need a jar candle (you can usually get these at grocery stores in hispanic neighborhoods).  Yellow is best, but white is also fine.  You'll also need a sharpie marker, a dollar bill (one for each person who will be participating; if it's you and a roommate, you should each have your own dollar), and some paper and pencil.  This spell is best if you can deploy it at the beginning of your search.  That way, Sabnok can find you the best possible place.

Before beginning, write a detailed list of what you want in your new home.  Be sure to include information about location, price, and amenities.  I'd also recommend something about the personality of neighbors and landlords.  Spend some time on your list.  The more complete and accurate it is, the better.  Now, if you're list is actually IMPOSSIBLE, I don't know that this spell will yield results.  In my experience, one of the tricks to working with the goetic demons for "little" things is to keep your requests detailed, specific, and reasonable.  That's because we're going to charge the demon to do his best to maximize all the things on the list at minimum cost.  This isn't one of those big high-falutin' grimoire workings (which I LOVE!) where you charge the demon to move heaven and earth to make the universe conform to you will.  This is just a little folksy nudge.  If you want, you can read my roommate's and my list here as an example.  We got everything on our list (we haven't met our neighbors yet; only time will tell on that one. UPDATE:  At least two other witches in the building, so far!)  If you want, write your list all pretty on fancy paper (red ink on yellow paper would be good for this), but that's not strictly necessary.  Set the list face-up on your working altar.  It will need to sit, undisturbed, for up to a week.  If you've already found a home, and just want to make sure that you get it, you can use a picture (or realtor's brochure, or whatever) instead of a list.

Draw a picture of Sabnok on the candle with the sharpie marker.  (it's ok if it's not a very good picture).  You can also just write his name and/or seal.    Do not light the candle until instructed to do so.

Next, you (or someone to whom you have explained the magic) must draw a picture of Sabnok. Try to get in touch with the spirit while drawing and ask him what he should look like.  The most salient features that I've always found coming through are the he has a lion head and wears a large iron key around his neck.  But, he might look different for you; that's ok.  It's TOTALLY OK if it's not a very a good picture.  Here's one I drew before I started having an illustrator for a roommate; as I said, I've done this working several times over the years.  Please don't judge my oh-so-emo Sabnok, I'm a really bad artist. 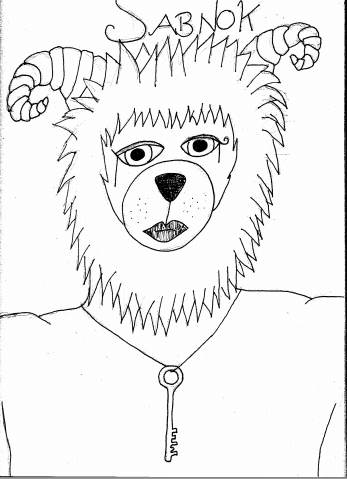 And here's the one my very talented roommate (www.briancharlesart.com) drew this time around.  He asked me to tell you that he drew it in a moving car (while we were out apartment hunting), and apologizes for it (which seems ridiculous to me).  Sabnock came through a little fiercer than usual this time (perhaps because it was almost 100 degrees out that day, or maybe because we were moving so fast?)  I noticed it while conversing, and you can see it in Brian's picture as well.  I had to tell him several times that, no, I didn't have any enemies that needed smiting, but thanks for asking.  Finally, I told him he could smite Abubakar Shekau (the leader of Boko Haram), but I wasn't going to pay extra for that.  UPDATE:  Abubakar Shekau may have been killed within a month of this casting, but it's hard to say; apparently, he fakes his own death a lot?  UPDATE:  Sadly, he lives. 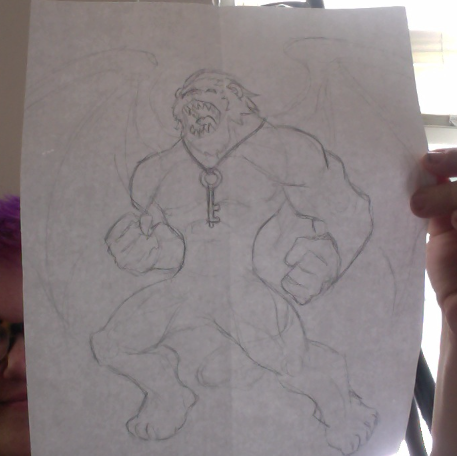 While drawing, have a conversation with Sabnok.  Use whatever method you'd usually use to talk to a spirit.  If that's not a thing you're good at, here's my best advice, seriously:  Just imagine it.  Talk out loud, and imagine responses.  Don't think about it too hard.  This particular spell is a great way to start off, because, honestly, you don't really need to be able to hear from him at all.  It's totally ok if it's 100% one sided conversation; it will still work.  While I guess some people are naturals at spirit communication, I really think it's mostly just about practice.  I'm not particularly naturally gifted at this; learning to hear/talk to spirits is well within almost anyone's bailiwick with sufficient practice.  I know that many people say it's harder than learning to see them, but that hasn't been my experience at all.  I think hearing is WAY easier, but I'm not very visual.  Brian, OTOH, gets reasonably clear visual, but only rare words or sounds.  I expect it's just one of those YMMV things.

Prop the picture up behind the candle, set a cup of water nearby (a fancy chalice is nice, but unnecessary) and light the candle.  Ideally, do this in the dark; I find the flickering candle light on the picture a very helpful aid in scrying.  But, as I mentioned, this time I did it while driving.  It's not as hard as people make it out to be.  Once you've worked with a spirit several times, it's much easier to "connect".  It's only the first (few) time(s) you need all the hoopla.

Start talking, out loud, to Sabnok.  Say something like: 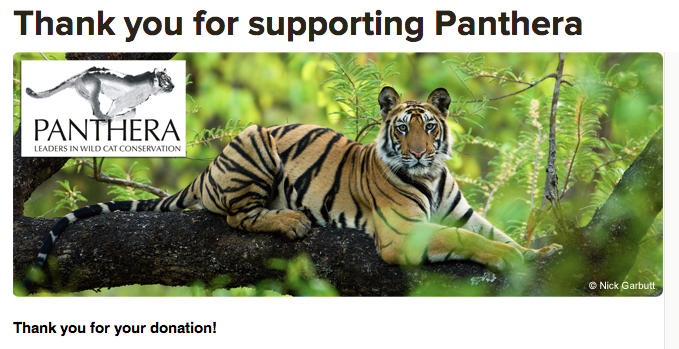 If he asks for something else, you can consider it, but if it's unreasonable, just say no.  You have the upper hand in this negotiation.  Don't agree to anything you don't want to give/do.  If your mediumship isn't (yet) up to a haggling session, or you can't "hear" Sabnok for whatever other reason, or you just don't want to, just say that, and explain to him that this is the deal, and he can take it or leave it.  Feel free to fake a bad connection to get out of negotiating, if you want.  Unless you've a very good medium, I'd be surprised if you can get clear communication from a spirit you just met, anyway.  I certainly couldn't. [UPDATE from 2020: Now I often can.  It's just practice.] In my experience, you have to talk "at" a spirit for a couple of sessions before you can manage to talk "to" it, and it's several more before you're really talking "with" it.  (But, like I said, YMMV.)  When you've settled on a deal, write it down, and put that under the candle too.  Be sure to explain that he only gets paid when you get what you want.

Once you've settled on a deal, light the candle and the dollar bills or whatever other offering you've decided on as a "down payment".  When in doubt, my experience is that basically almost all spirits are happy with offerings of charity, grain, oil, and honey.  The most important part of the offering is flame (the candle) and water.

I didn't think to take a picture before we burned the candle, but here's our setup now that it's done. 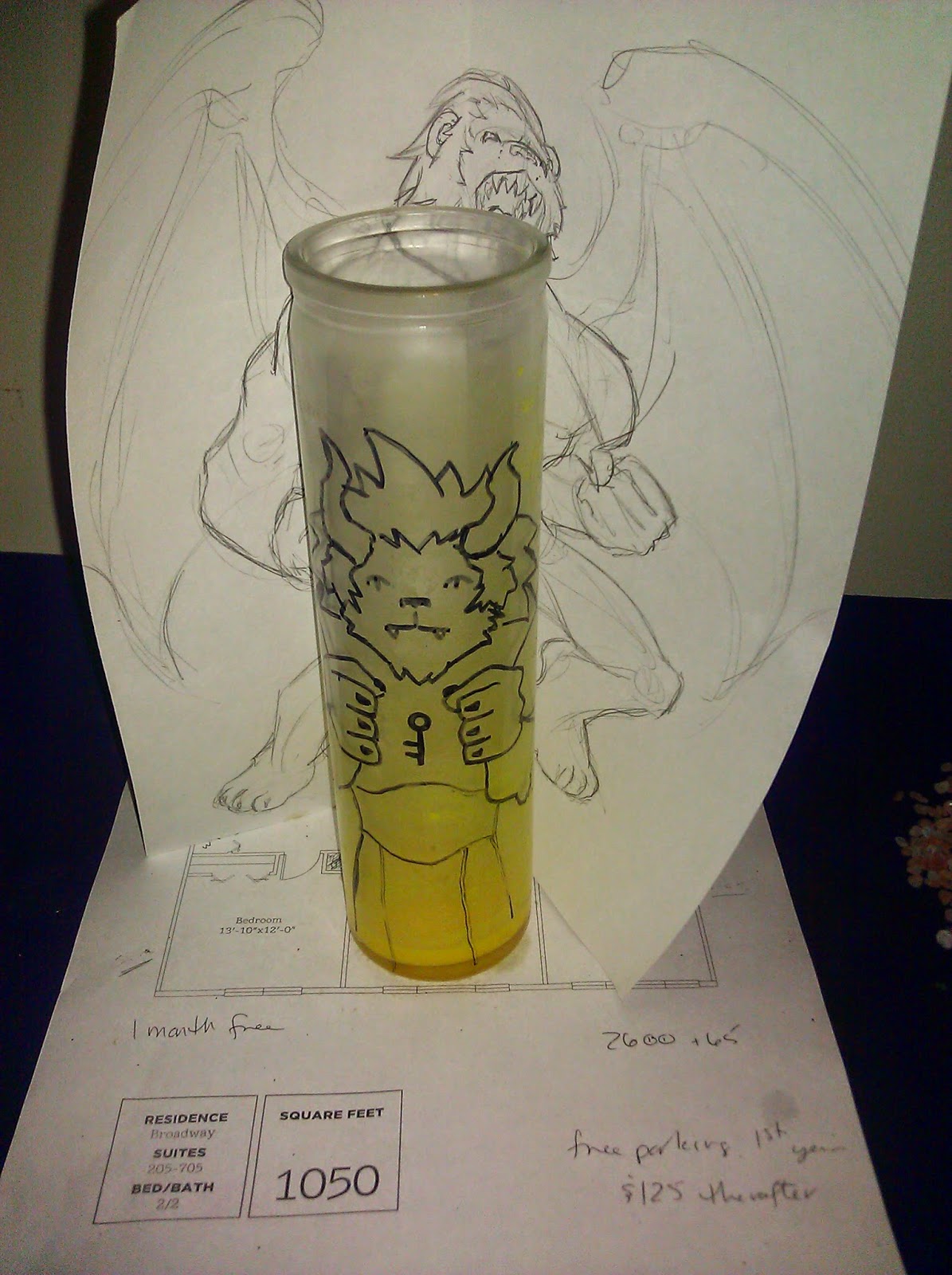 I'm on my way to go sign a lease now.