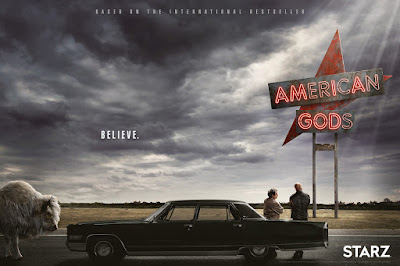 Recently, at a trance possession workshop, someone said something about how the practice "has to be grounded in some kind of culture". They meant to say that the practice, which was originally Norse, could be used as a template for developing a different practice, within another pagan cosmology. But it got me to thinking. With perhaps some very technical exceptions, everything humans do is rooted in some kind of culture, because we humans are, ourselves, always deeply rooted in culture. So grounded in culture are we that we sometimes fail to even recognize our own culture as a culture, like a fish who doesn't know what water is.

That line of thought, along with the recent premier of the American Gods TV show(one of my all-time favorite books), have got me doing a lot of thinking about what the "native" paganism of my own culture looks like. The #AmericanGods project is part of that. In case you've missed it, I'm encouraging everyone, but especially those of us here in North America, to write a short (or long!) telling of their favorite local-to-them spirit or god. A spirit who emerged in and from their own land. (What exactly "your land" means is up to you, but at least one location you associate with them in your telling should be within a 4 hour drive of you) . Those can be pre-colonial spirits of your area, or more modern spirits, but not imported ones.  And, of course, like any authentic telling of myth, my telling is mine, arising out of this moment, and unlike anyone else's. If you publish your story online, tag it #AmericanGods, so it receives some trickle-down publicity, and gets wrapped up in the mass-media current.

A note on the "rules": One of the many powers of the True Bard, as you well know, is the power to not just get away with ignoring any rule you want, but to make the judges applaud when you do so. Is not our beloved god of stories and bards also the god of lies and cheats?


I'm keeping an updated list of all my American Gods stories here. I'd love to include yours as well, if you'd like me to.